Understanding the Stages and States of Sleep

If you’ve ever spent a night tossing and turning, you already know how you’ll feel the next day — tired, cranky, and out of sorts. But missing out on the recommended 6.5 to 9 hours of shut-eye nightly does more than make you feel groggy and grumpy. The long-term effects of sleep deprivation are real.

Our bodies need sleep, just as it needs air and food to function at its best. During sleep, our body heals itself and restores its chemical balance. Our brain forges new thought connections and helps memory retention all of which happen at different stages of sleep.

In short, without quality sleep, our brain and body systems won’t function normally and can dramatically lower the quality and even duration of our life.

Beyond the negative impacts it also detracts from our ability to effectively access altered states during sleep. The hypnagogic state (transitional state of consciousness between wakefulness and sleep), dreams (succession of images, ideas, emotions, and sensations that usually occur involuntarily in the mind) and lucid dreaming (a type of dream in which the dreamer becomes aware that they are dreaming and is able to influence the dream environment). These altered states have been the genesis point for some of the world’s most disruptive innovations and discoveries including, Google, the idea of a double helix spiral structure for our DNA, Einstein’s Theory of Relativity, the Periodic Table, the Structure of an Atom, among many others… In coming consciousness hacking secrets we’ll explore ways in which we can access these states.

For now, let’s understand the basic underlying biology/neurology of sleep, as a foundation to build upon.

Sleep has distinct stages. It can be broadly segmented into rapid eye movement (REM) sleep and non-REM (NREM) sleep. NREM sleep is divided into four sub-stages: stage N1, stage N2, stage N3 and N4. Characteristics of REM and the 4 NREM stages of sleep and the associated brainwave states are listed below.

As we wind down in the evenings we transition into sleep from our waking state, higher-frequency (13–32 Hz) beta activity, to slower wave alpha (8-12 Hz). Note: If you have trouble getting to sleep it’s likely your brain is still at the higher beta frequency.

Hypnagogia is marked by a high level of both alpha and theta brainwaves. As we begin to fall asleep, the brain moves from a prevalence of relaxing alpha waves to drowsy theta waves, but this fluctuation means that no single type of brain wave is dominant during hypnagogia.

N1: Descent into stage 1 non-REM sleep is characterized by decreasing brainwave frequency 4–7 Hz, called theta waves. Lasting only a few minutes, the first stage of sleep is light and easy to wake from.

N2: Descent into stage 2 non-REM sleep is characterized by 10–15 Hz oscillations called spindles in the alpha range, which occur periodically and last for a few seconds. During this stage, which is also fairly light, your brain waves begin to slow.

N3 & N4: Stage 3 non-REM sleep is characterized by slower waves at 2–4 Hz. Stage 4 sleep is defined by slow waves (also called delta waves) at 0.5–2 Hz. This is also known as deep sleep. After reaching this level of deep sleep, the sequence reverses itself and a period of rapid eye movement sleep, or REM sleep, ensues.

Rapid eye movement (REM): During the final stage in the sleep cycle, your brain becomes more active and dreams occur. Our brain is processing information and storing long-term memories. . REM sleep is characterized by low-voltage, high-frequency activity similar to the EEG activity of individuals who are awake (Alpha & Beta).

During a typical night, we cycle through various stages of sleep. This cycle repeats every 90 to 110 minutes. We typically spend longer in deep sleep in the initial sleep cycles and as sleep progresses, REM cycles increase in length. 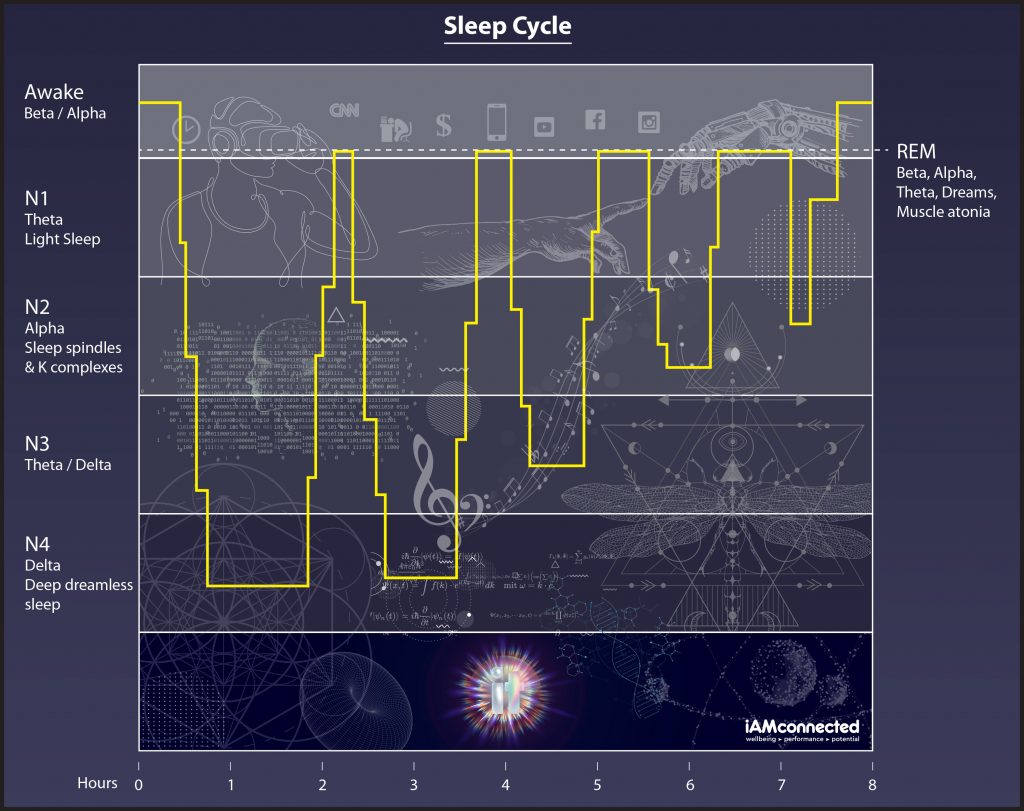 As you can see there are lots to explore in and around sleep. A solid foundation starts with effective sleep. For healthy consciousness hackers, it’s recommended approximately:

There are numerous sleep trackers on the market which can help you understand the quality of your sleep. iAMconnected 6WC is the ideal place to get started tracking, understanding and optimising your sleep.